God Moves In A Mysterious Way

Raised for Our Justification (Sermon Audio)

But the words “it was counted to him” were not written for his sake alone, but for ours also. It will be counted to us who believe in him who raised from the dead Jesus our Lord, who was delivered up for our trespasses and raised for our justification.
– Romans 4:23-25 –

On Resurrection Sunday I preached a message on Romans 4:23-25. I asked the question: What does the resurrection of Jesus Christ mean? And I showed from Romans 4:25 how Christ’s resurrection served to justify his people. In four points, I argued

On this last point, I aimed to show Christ died and rose as public person…

Thou Shepherd of Israel, and Mine

There Are Worse Things Than Hiding Easter Eggs

Dr. Jack Graham’s Prestonwood Baptist Church is having their annual Easter Egg Drop – in which they dump thousands of eggs out of a helicopter for an egg hunt at their Dallas campus. Graham, a two time president of the SBC and big fan of Beth Moore and Word-Faith, Hillsong pastors Brian Houston and Christine Caine, is a proven #DOWNGRADE specialist and so a helicopter egg drop (a Stephen Furtick specialty) at Graham’s church seems hardly newsworthy. Prestonwood’s press announcements about the egg drop, devoid of Christ altogether, narrowly avoided becoming the focus of Friday’s Daily #DOWNGRADE segment.

But the words of Clayton Pruett, circulating in social media, stung me back into focus and put things into perspective.

The Centrality of Preaching

Preaching has fallen on hard times. The great Protestant Reformer, John Calvin, wrote: “At the present day there are many who are well-nigh sickened by the very name of preaching, because there are so many stupid, ignorant men who blurt out their worthless brain waves from the pulpit.” That was 450 years ago! Today not only has preaching been decentralized, but the greater part of what is called “preaching” no longer deserves to be at the center. This has created a vacuum and few have raised a voice while a Pandora’s Box of replacements has rushed in to fill the void.”

A.W. Tozer said of the danger: “One of the most popular current errors, and the one out of which springs most of the noisy, blustering religious activity in evangelical circles, is the notion that as times change…

Today is Palm Sunday. Reflecting on the language used in Matthew 21, Mark 11, and Luke 19 about that event, here’s a poem called “Hosanna.” 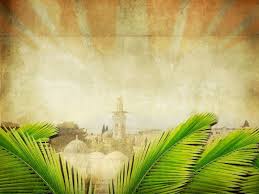 “In the village,” said the Savior,
“Find a donkey that is tied,
On which no one else has sat.
Bring it so that I may ride.”

To the Master came the donkey,
Guided by the two he sent.
And they threw their cloaks upon it
Right before he climbed and went.

Toward Jerusalem he journeyed,
As the crowds were laying palms,
Shouting “Hosanna! Blessed is he
Who in the name of Yahweh comes!”

Then Pharisees commanded Jesus,
“Teacher, stop these words they shout!”
But Jesus said, “If they were silent,
Rocks themselves would still cry out.”

The Sands of Time

Theology has fallen on bad times. In one sense, it always has. The image of the guy with an insanely long beard, surrounded by books, looking like the guy in the photo above, is just not appealing to us. It’s too cerebral, too based on the brain, too intellectual. “Christianity is not intellectual, it’s faith, the heart, the soul” – according to a preacher friend of my dad’s. That attitude is pervasive in evangelical Christianity.

For instance, I recently went with my Dad to go and visit a church. Now, whenever I go somewhere with Dad and people see this burly guy right next to him, they usually think I’m one of his elders and so my Dad will point out that I’m actually his son. After the service, the pastor of the church, who used to pastor in the same denomination as my Dad when we lived in Germany, came…